What do I say now?

I’ve written and rewritten and edited this draft for the last three days.

It originally started out with a rationalization:

Lamictal and hormonal birth control don’t play nice. When I first started Lamictal, I would take the bc placebos for that week and start exhibiting symptoms of PMDD. My Pdoc recommended that my OB/Gyn consider putting me on a continuous cycle for three packs and then have the off week. And I’ve been doing that for almost 2 years.

I have that liberty to schedule when Aunt Dot comes to visit. Risking a complete mental break down every 63 days was better than having to do it every 21. In the last year, the last couple had been pretty mild. I thought I was in the clear.

I lost track and went 5 months this time.

What person with bipolar disorder wouldn’t want to be able to blame conditions that are within their control?  I was telling myself that Monday would come, I would be back on the BC and all would be right with the world.  In the meantime, I adjusted my dosages – with no effect.  I did that a couple of days ago thinking I could put a bandaid on the situation until there was a real fix, meaning I straightened my meds out and all of this moody woman bullshit was over with.

PMS was a word invented by men to explain women’s emotional behavior.  (No offense intended to my male readers).  My husband discovered my self-inflicted injuries today.  Actually, more like he discovered the band-aid that I’ve been hiding under layers of bracelets all week.  He said, “What’s that?”  I answered in a low voice, with T.D. on my lap, “Nothing.”  I won’t lie.  I’m sick and tired of cowering in fear for someone else’s approval.  I didn’t lie to him.  It means nothing to him, but it will stay with me for a long time.

He asked again, “What is it?” And once again I replied in a murmur, “It’s nothing.”

“Every time you get your f***ing period, you have to go and cut yourself!!!”

I don’t recall being afflicted with such in my very first post, “To See If I Still Feel”. And I can honestly say that was the very last time I engaged in self-injurous behavior.

I’m starting to suspect it isn’t completely me.

My marriage has been on the rocks lately. My kid is raising hell. I have the crushing weight of being solely responsible for T.D., anything domestic, and work. I am expected to have time for everything. I am also expected to take all kinds of crap from everyone when something goes wrong. That is, surprisingly, with the exception of my boss and co-workers.

I have dealt with be mistreated and disrespected in my home. I have endured vicious criticism and blame. I am overwhelmed and over burdened. And anytime I speak up, not only am I wrong, I am intentionally starting trouble. Suddenly, my condition becomes a reality because it’s convenient to blame me “being a bitch” on having bipolar disorder.

I am falling apart and it’s not even at the seams. It’s from consistent strain and wear on my fabric. And when someone I let close enough to me starts taking swipes… it’s enough. It’s more than enough to come undone.

I wrote to a dear friend that I used to be able to depend on C.S.  I described all of the wonderful things he had been to me.  But now, I feel like I’m being pushed off the ledge and then kicked in the face when I finally hit the bottom.

Each morning, when I awake, I have been telling my dearest friends here that I’m doing better.  And each afternoon, I’m doing worse than the day before.  After that comment, “Every time you get your f***ing period, you have to go and cut yourself!!!”, I’m about to give it up.  I was mistaken when I said to my dear friend that I wasn’t sure that he was even aware of what he was doing to me.

We don’t get to choose our family.  Sometimes, we can’t choose who we fall in love with.  But we always have the choice to make the decision to devote ourself to each other through marriage.  How could someone who chose me, who is supposed to love me, be causing me so much hurt? 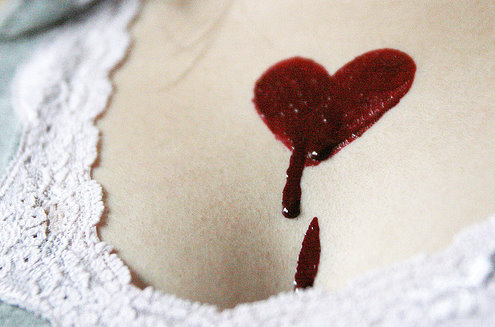