I have a lot of things to be thankful for. Best of all, my family. Especially after this Thanksgiving.

I had originally forgotten that our presence was required for Thanksgiving dinner at the in-laws. I was reminded the moment I awoke. Ugh. There goes my plan to visit with my family and enjoy the rest of the day in a turkey coma.

I don’t loathe my in-laws. In fact, I love my MIL and FIL. However, to be frank, with the exception of my MIL, they are my step-in-laws. That includes all of the extended family, Nana, and Aunt N. Those two are some characters. But, in Italian families, everyone is kin no matter how they came about being so.

You know Lulu. Everything happens with a certain twist.

Family gatherings are awkward without MIL. She’s the link that solidifies me as part of the family. I’m not used to Italian families, honestly. They’re very affectionate, even physically so. Scottish families are not. We wave at each other from across a great expanse and smile.

We went to my family’s dinner, which is extremely relaxed and informal. To my parents, Thanksgiving is not really a celebratory holiday for them. It’s a ritualistic yearly event encouraging gluttony. In prior years, it was actually closer to Festivus.

Immediately following that dinner, we packed up the family and headed to the in-laws. Two Thanksgiving dinners was going to be a challenge. It was like (wo)man vs. food. And I’m in no shape for a challenge like that!

There are thirteen miles between our home and my in-laws. On the way there, C.S. talked to MIL. Apparently, FIL was at Market District to buy one of those hideously expensive, pre-cooked dinners! I was in shock! What an absolute waste of money! And next, how could they possibly afford to drop over $100 on something that could be prepared for half of that when they are so hard-up?

We arrived at Nana’s and called FIL to meet us up there. He told us that he’d have dinner in the oven and it would be ready in two hours. Two hours! Unfreakin’ believable. Over $100 on a meal you actually had to cook anyway?!

And what to do in that two hours? The house is not child-proof by any means. There is no cable and no toys for T.D. I could only imagine the disaster awaiting us.

So, we waited in the car, in 40 degree weather with the heater off. T.D. was peacefully slumbering with his parka on, in the car seat. C.S. tells me that he’s going to take more pictures of Sebastian (the totalled car) from the interior for to document the damages in the lawsuit.

Forty minutes elapsed. I was absolutely freezing my everything off, tingling from the cold. My husband called FIL back. “Ohhhh,” he slurred, “I was playing with the dogs. I’ll be up in a second.” FIL time runs on quite a different clock. Ten minutes later, he pulled into the driveway.

He stumbled out of the car with armloads of packaged, partially cooked food. I tended to T.D. I met my FIL in the kitchen and he gave me a wobbly hug. He quietly admitted to me, “I don’t know what happened. I was sitting there and I just fell asleep.”

C.S. stayed in the kitchen to help. FIL stood there, silent with his head hanging. It became clear that he had fallen asleep standing up! C.S. woke him and he said, “I took some pain pills earlier. I’m going to wake up with a cigarette in the smoking room.” He was never to be scene again.

I noted Nana was nowhere to be seen as well. Apparently, she had taken another of her infamous falls and went back to bed for the day. It was T.D. and I surfing the four channels available to find something, anything, for entertainment. It came down to Maury or Judge Judy.

Once everything was in the oven, we took T.D. outside to run around the vast property. It wasn’t without shenanigans. There had to be some entertainment to make the trip remotely worthwhile. 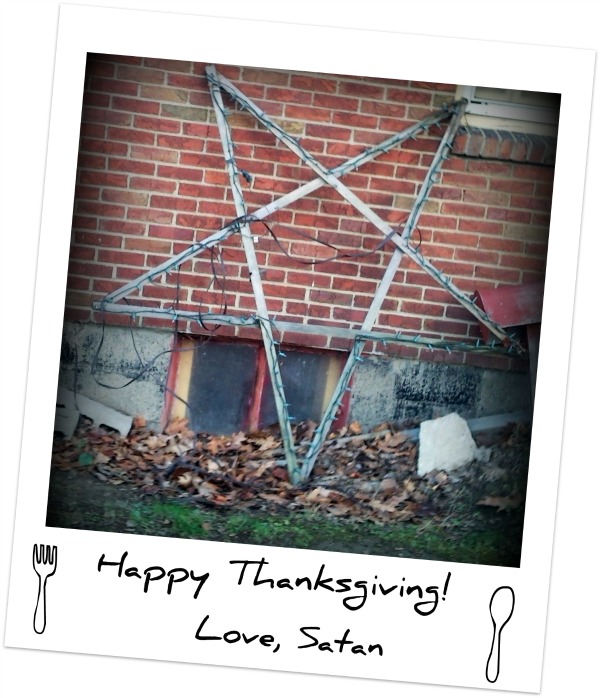 After, we joined FIL in the smoking room. T.D. found his favorite shows and sat in FIL’s lap for over an hour. And eventually, FIL passed back out, his head hanging backward with his mouth completely open. It was a sight to behold. I wanted to take a photo, but I figured as hilarious as it would be, it would likely be insulting.

When T.D. got up from FIL’s lap, FIL’s jeans were soaked with urine. It turned out that my son’s diaper leaked. And yet, FIL was absolutely oblivious. It actually looked as if FIL soiled himself! He groggily asked, “What happened here?, completely unphased.

C.S. and I joked about the absolute ridiculousness of the situation. Why the hell were here? What is the whole point of having to cook our own dinner? Who exactly are we supposed to be visiting here? Everyone here is unconscious but us!

We went back up to finish dinner. C.S. asked me for assistance in the kitchen, leaving T.D. in the living room entirely unsupervised. You know, I’ve been to every major holiday at my in-laws house for the last five years, and I still don’t know where the light switch is in the bathroom. How would I know where anything is in the kitchen! Everything was in bags, tucked away in drawers!

That is when I started to notice the address labels. There was one on the refrigerator and another on the cabinet. I looked some more and found more on the stove and the cabinet above it. They were littered throughout the kitchen! I began to play Where’s Waldo!

I returned to the living room to find absolute chaos. Life alert was activated. The phone was off the hook, beeping. Cabinets hung open with their contents strewn about the floor. And T.D. stood there repeatedly pressing the button the answering machine. I couldn’t help but laugh. What destruction! I was almost proud.

I rejoined my husband in the kitchen to ready the table. I said, “I found eight, beat that!” He laughed and asked, “Did you see the one on the toilet?!”I burst into hysterical laughter and exclaimed, “No!” He smiled devilishly and said, “I took pictures!”

Property of Nana, who is afraid you're going to jack her toilet.

I looked and burst into the hardest laugh I had experienced. My legs turned to rubber and I fell to the floor. My stomach and sides ached, while I laughed so hard, I made no noise. I curled up and just shook like a Tickle Me Elmo.

Dinner was served. Nana came out of her bedroom wearing only her nightgown. Now, had I know this was casual dress, I would have stayed in my pajamas too! FIL came from downstairs and we all assembled at the tabled. Their family is extremely Catholic, so FIL mumbled through grace.

Nana doesn’t hear very well, so our conversations are very limited. This is despite the fact that I am a 5’1″ powerhouse of sound. I’ve been teased my entire life for having a loud voice. When I did solos, I did not need a microphone, even from a large auditorium. And yet, Nana cannot hear me. I looked over and FIL was practically asleep in his plate. C.S. and I exchanged hilarious glances across the table.

This why they call it a “Family Circus”..

This exercise was pointless. With one exception.