I had come to terms awhile ago that Bipolar Disorder is a lifelong disorder. There is no cure. There is treatment. An abundance of treatment.

It was disheartening. It was a huge, ever-looming, oppressive idea. I’m going to go through this for my entire life. Not just a portion, for instance, the rest of my adult life. No. This, this bipolar disorder has been a companion for longer than I can remember. In fact, I could even conclude that it was the very fire of Bipolar Disorder that gave me life in the first place. Born out of this fire and ice.

When I first started taking Vitamin L, I researched it.  And emblazoned at the top of the Lamictal website is the following statement: Prescription LAMICTAL is used for the long-term treatment of Bipolar I Disorder to lengthen the time between mood episodes in people 18 years or older who have been treated for mood episodes with other medicine.

How long is that?  A few days?  Maybe a couple of weeks?

Another resignation.  I pitched any hope that there would be any long-term stability for me.  I resigned myself to the idea that I would always be in some state, whether I was slipping down to reside at the bottom of the abyss, streaking through the sky.  It didn’t seem as though there was another option.  Things are the way they are sometimes.  It’s up to us to come to terms with that.

I had decided that there was no such thing as remission in mental health disorders.  For some, it was either dormant or active.  For me, with Bipolar Disorder, there were three states: Depressive, Stable, and Hypomanic, none of which are permanent.  It is just the nature of the disorder.  Hardly anything can have any permanency with ever shifting landscapes.

At the end of October, something incredible happened.  I was not in a state of any kind.  It was like standing between heaven and hell.  Limbo, waiting for the other shoe to drop.  I was convinced that the great plunge was coming, but I only floated down easily from the mother of all hypomanic episodes.  I planted my feet firmly on solid ground, perhaps for the first time in my life.

Initially, I didn’t roam freely around this strange terrain.  There had to be a sinkhole, a bed of quicksand, something, disguised in this lovely place.  About a month of living in this landscape, with the help of others, I started to believe that there was a possibility for full remission.  I was cynical at first.  I had no evidence in my own experience to back up this notion.  However, I began to idealize a wonderful life without living in the constant fear and ever present shadow of Bipolar Disorder.

Idealization is dangerous, and it is something I often fall victim to.  I am not sure if it is a part of the human condition, as much as it is just a characteristic of certain people or disorders.  It remains to be one of the most perilous mechanisms of my delicate mind.  Typically, I knowingly guard myself against this with great cynicism unless I am proven otherwise.  Defy me.

When idealizations occur for me, it is akin to a shattering mirror when realities emerge.  In this instance, it was as if I had come to the ledge, holding tight and gazing deeply into that mirror reflecting my stable illusions.  Distracted by the beauty of it all, I took one false step.  All it takes is one to shatter the illusion, and wake up in the murky depths of depression. 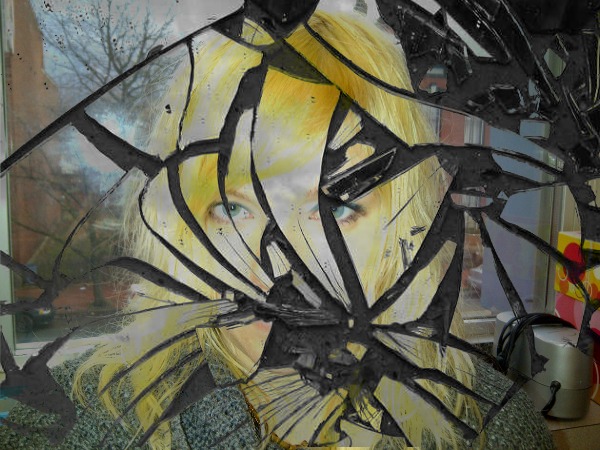 Prior to this run of stability, I had no frame of reference.  A great many people mourn the loss of their lives that occurred prior to the onset of symptoms.  There was no such frame of reference for me.  My diagnosis was a relief.  It provided explanations as to why I was different, and no matter how hard I tried, I couldn’t seem to function properly in any capacity.  I was always content with the diagnosis itself, even if I was affected by the disorder itself.  It gave a name to many of the awful things I had started to believe were just me.

I’m not sure which is worse.  Suffering the constant bombardment of symptoms with little reprieve, or mourning that loss of a blissful, stable state and life I had, but slipped away.

This post brought to you by Tallulah, my Blackberry Bold.